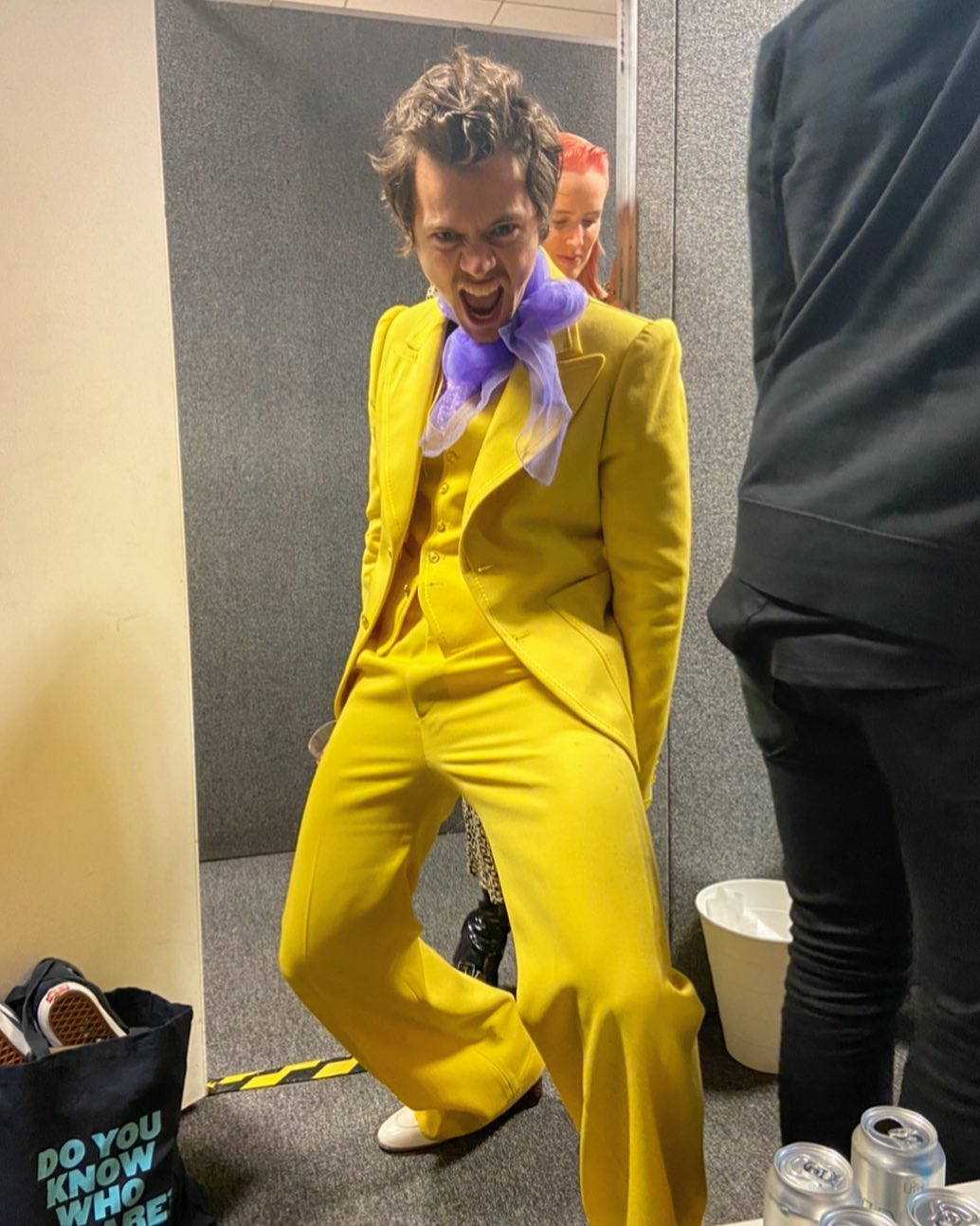 Leave it to Harry Styles to brighten your day in this gloomy year: let’s take a look at his outfit for the BRIT Awards 2020 Afterparty at The Standard in London, England.

He wore a vibrant yellow Marc Jacobs suit from the Spring 2020 Ready-to-Wear collection complete with a lilac pussycat bow matching the dotted silky lilac blouse underneath (see the suit in better detail here: 01, 02, 03), everything paired with white shiny loafers and matching lavender nails.

According to an interview that his stylist Harry Lambert gave to Vogue.co.uk, everything tied-in with his style evolution and his ease in wearing gender-fluid clothing:

“Tailoring has been an important part of Harry’s wardrobe for some time now. We’ve never been afraid to experiment with silhouette, and tonight is no exception. […] The looks draw inspiration from the catwalk collections.”

Lambert describes the looks as subscribing to the ‘granny chic’ aesthetic, with a touch of Diana, Princess of Wales but the process is not merely about instructing the entertainer to dress in a certain way.

“For the past few seasons I have been really keen to get Harry into some of Marc’s ready-to-wear and, coincidentally, Harry has been talking about wearing a yellow suit for some time. The moment I saw the marigold suit on the Marc Jacobs spring/summer 2020 runway, I knew we had to get it. […] Marc and his team have been great, and I think all their hard work is really going to pay off. It’s rock ‘n’ roll, with a touch of British camp.”

According to his fans, the lapel pin he adorned his suit with, which said: “Treat people with kindness” was part of his concert merch.

Treat People with Kindness, also abbreviated to “TPWK”, is a slogan used by Styles to promote his message of love, acceptance and kindness to people. Styles started using the slogan on his debut concert tour in 2017, on a badge on his guitar and on tour merchandise, including Pride t-shirts sold to raise funds for GLSEN.

GLSEN (formerly the Gay, Lesbian & Straight Education Network) is an American education organization working to end discrimination, harassment, and bullying based on sexual orientation, gender identity and gender expression and to prompt LGBT cultural inclusion and awareness in K-12 schools (from kindergarten to 12th grade).

Founded in 1990 in Boston, Massachusetts, the organization is now headquartered in New York City and has an office of public policy based in Washington, D.C..