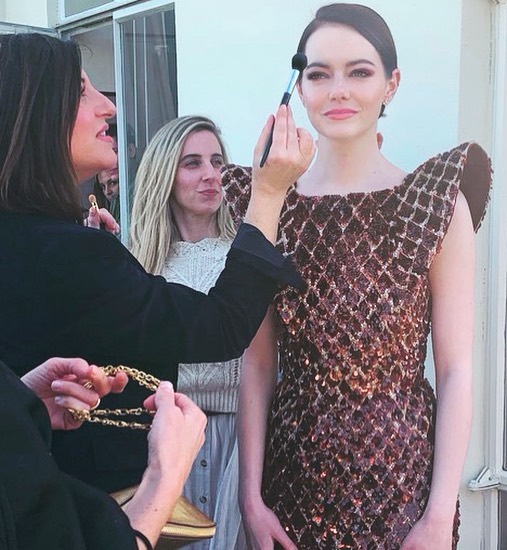 Emma Stone may not have won a prize, but she definitely won a lot of attention on the red carpet of the Academy Awards 2019.

She was nominated in the category Best Supporting Actress for her role in the movie The Favourite which was itself nominated in several other categories.

She wore–no surprise–a burgundy custom Louis Vuitton column gown with sharp shoulder accents, a dress embroidered with sequins, pearls and beads that made quite the stir online.

According to the Maison, it was no easy task either according to a PEOPLE article: “The embroidery took 712 hours plus 22 hours to adjust it after shrinkage. The artwork was made by 2 people in 5 days. It was quite difficult because the design was geometrical and the team had to reduce and increase the elements dimensions without changing their total number.”

Makeup artist Rachel Goodwin explained to Allure her thought process behind the makeup she chose to create on the actress: “I did a really deep copper on her eyes and I kept it really graphic—sort of clean and simple.”

“There was really no color anywhere else on her face. It’s very neutral everywhere else—pale lips with a little bit of gold flecks to tie the texture together and soft peach cheeks. […] I wanted her to be able to enjoy the champagne, enjoy the celebration with her friends, and not be thinking about a lip all evening.”

If you want to know the exact products her MUA used on her, check the article here.

Nail artist Emi Kudo used an OPI nail polish in the shade The Beige of Reason to complete the look, trying not to take anything away from the already complicated dress.

The Favourite is a 2018 period black comedy film directed by Yorgos Lanthimos.

Set in early 18th century Great Britain, the film’s plot examines the relationship between two cousins, Sarah, Duchess of Marlborough (played by Rachel Weisz) and Abigail Masham (played by Emma Stone), who challenge each other to be Court favorite of Queen Anne (played by Olivia Colman).

Such a treat for the eyes if you love costumes and period dramas.

From @NicolasGhesquiere’s #LouisVuitton ateliers in Paris to the #Oscars Red Carpet in Los Angeles, #EmmaStone’s custom silk gown was hand-crafted from over 700 hours-worth of crystal, beaded, and sequined embroidery.